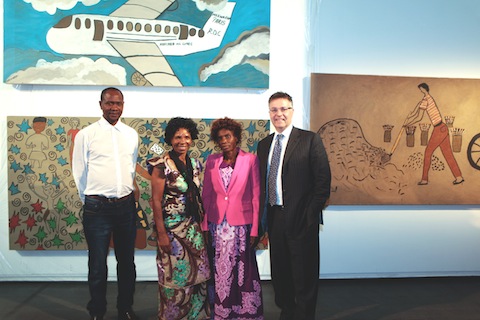 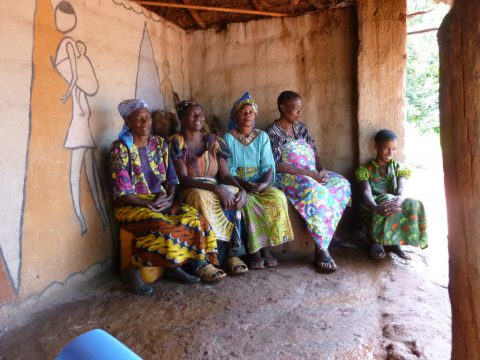 Women of the Makwacha village © AAD 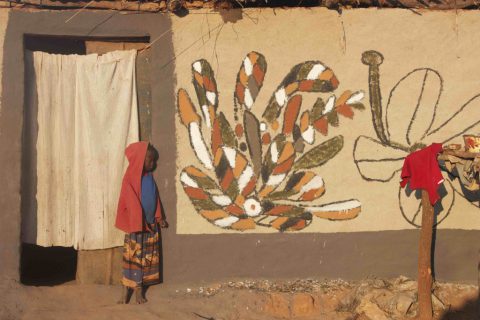 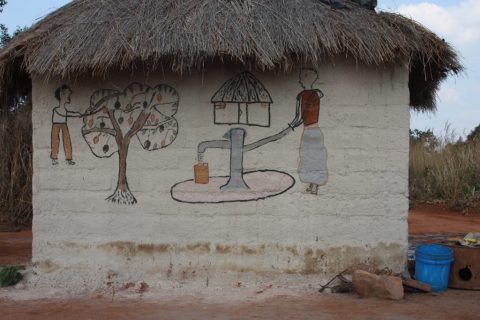 AAD has been committed to the community of the village of Makwacha for almost 5 years. This commitment began in 2009 with the drilling of three wells, which guaranteed access to drinking water for the village of Makwacha, even during the dry season.
The women of this village practice their own ancestral activity: each year at the beginning of the dry season, they produce temporary paintings that represent the striking events of the past year on the walls of their huts using natural pigments. In order to share this unique mural art, AAD organised an exhibition at the Maison des Métallos in 2014.

African Artists for Development initiated in March of 2009 the program «Women for Water”, supported by Sammy Baloji. AAD turned to locally-born videographer and photographer Sammy Baloji, who recorded the working lives of the women of Makwacha and wanted to give back to the community by bringing them recognition for their art. Together, they identified their major concern: access to drinking water, especially in the dry season.
By mobilizing the expertise of Aquassistance, the humanitarian association of the Suez Group staff, an expert in access to water in developing countries, three wells with a depth of 80 metres were drilled. The first well was drilled in 2010 whereas the two others were drilled in the autumn of 2011. Each well is equipped with a manual pump, and together, they give the inhabitants of the village of Makwacha and two neighbouring villages, access to drinking water.

By committing to tackle this crucial issue, this program is in line with the Millennium Development Goals set out by the UN: “promote gender equality and empower women” (goal 3) and “halve the proportion of people without sustainable access to safe drinking water” (goal 7 target 2).

The objectives outlined above have been met with the creation of 3 wells that guarantee access to safe water. In addition to this, a management committee composed of 7 members, mainly women artists, is responsible for the maintenance of the wells, which gives these women a key role in their villages. Traditionally in charge of the supply of water, but systematically excluded from all the political bodies in their village, this committee is a (first) means of affirmation for the Lambas women of Makwacha.
These wells guarantee to more than 5 000 inhabitants, access to drinking water throughout the year, thereby avoiding the spread of illnesses due to poor water quality or a water shortage, and increasing agricultural production during the year, which empowers the inhabitants to become self-sufficient regarding the food supply.
“Women for Water” goes beyond being a simple development initiative, by promoting a secular artistic tradition through which the Lambas women become the storytellers and the depositaries of the cultural and historical heritage of the village. They are thus no longer obliged to walk long distances, sometimes as far as 5 km per day, and can fully devote themselves to their art. The unique mural art of these women was presented to the French public for the first time in April 2014 during the exhibition “Les Femmes de Makwacha” at the Maison des Métallos.

The Community of the Women of the Village of Makwacha