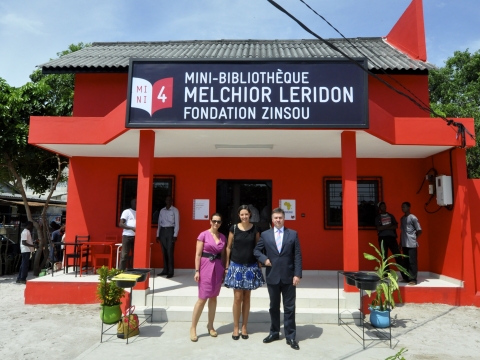 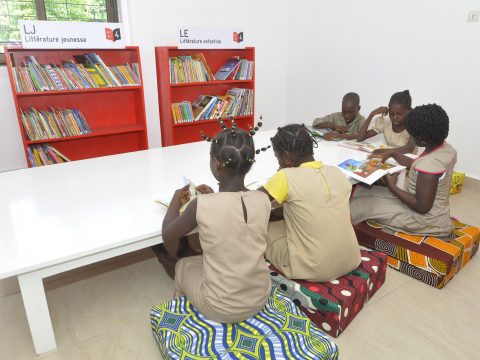 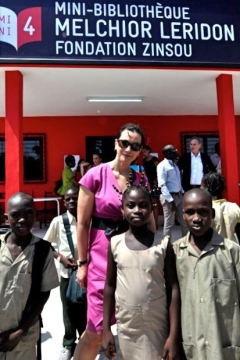 Gervanne Leridon, the co-president of AAD, with three children of the Agla district © AAD 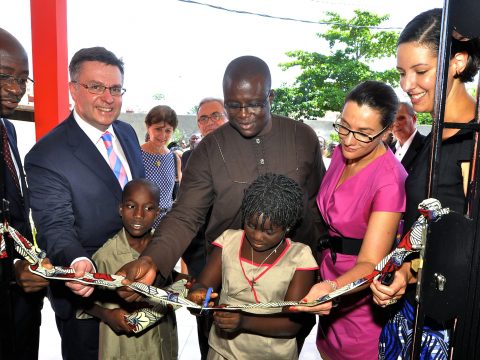 The inauguration of the first mini-library © AAD 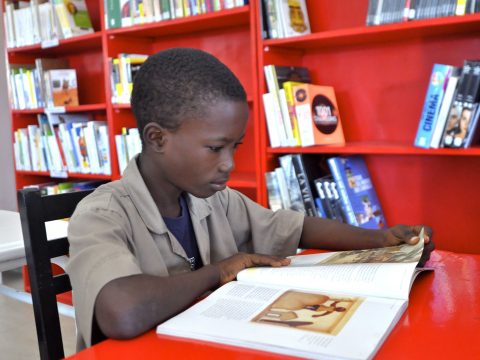 A young reader at the Melchior Leridon library © AAD 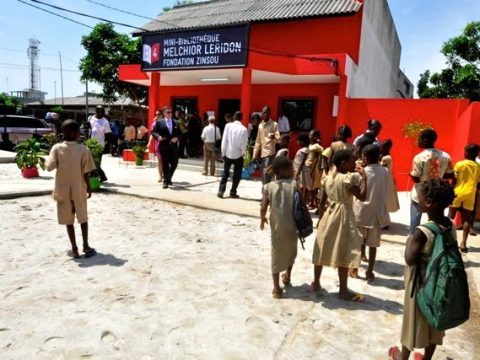 The children are making their way to the library © AAD 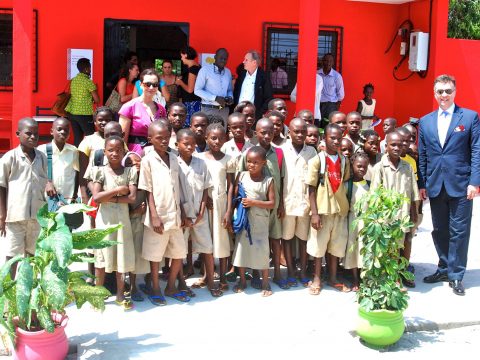 The children are about to enter the library © AAD

AAD involved itself in Benin by funding the creation of the Lovely Libraries of Benin. The first library, named Melchior Leridon, was opened in the Agla district of Cotonou in November 2012, in partnership with the Zinsou Foundation and the visual artist Dominique Zinkpé.
A second library should soon be opened in Abomey, at the location of Unik – the creative space of the visual artist Dominique Zinkpé.
On this occasion, a contest was launched in November 2015.
In this way, AAD contributes, at its own level, towards the democratisation of books and reading in this West African city.
The first library provides young Beninese with a documentary database made up of over one thousand publications. The restoration works of the first library “Melchior Leridon”, done in close collaboration with the Zinsou Foundation, started in September of 2012. The library was then inaugurated on the 8th of November 2012. In order to make this library a place that stimulates creativity and an interest in contemporary art among young people, AAD has called upon the Beninese visual artist Dominique Zinkpè, who produced and installed a sculpture symbolically representing a book.

During the last two decades, school enrollment rates have increased significantly in Benin. However, such progress in terms of education is hampered by limited access to books due to the fact that they remain expensive and rare. This stems from a distinct lack of local publishing houses, which would facilitate the large-scale circulation of printed materials.

Impeding literacy and education in general, the lack of access to books also deprives the residents of such regions of the possibility to escape into one’s imagination, to thrive on a personal level and to develop creatively.

The BBB program was conceived in order to alleviate two major problems :

-the absence of school textbooks in schools, and the limited access to books in general.

-arouse the interest of young students for reading and culture.

This program is therefore in line with the second and third objectives of the UN Millenium Development Goals : ensure primary education for all and promote gender equality and access to culture for girls and women.

In the district of Agla, in Cotonou, AAD has funded the creation of the Melchior Leridon library, opened in November of 2012. This library has, since its first operating year, welcomed more than 25 000 readers. A large majority of the visitors have been young students, from primary as well as secondary school. Whilst the program has been in operation for over three years, the average number of monthly visitors still amounts to more than 2 000 people.
Furthermore, AAD has sought the expertise of the Beninese visual artist, who created for the site, a wooden and metal sculpture, which symbolically represents a book.

Created in 2005 in Cotonou, the Zinsou Foundation is a private family initiative aiming to promote culture and art in Benin and in the sub-region.
Considering it is an exhibition area, the foundation presents the work of African and International artists. For some years now, it has extended its field of activity through the implementation of social and cultural projects for children.
The Zinsou Foundation has already funded the creation of five libraries, equipped with new books and modern as well as welcoming facilities. Its knowledge in the field has been an undeniable asset in carrying out the creation of the first library of the Lovely Libraries of Benin.

7 November 2020 - AAD-Fund celebrates the International Day of the African Writer!
18 June 2020 - the floor is given to confined artists #17
13 January 2016 - AAD’s video !
29 June 2015 - Education is the most powerful weapon which you can use to change the world
12 February 2015 - A monumental sculpture of Zinkpé in the library “Melchior Leridon”
24 September 2013 - ZINKPÈ : “A MUTUAL RESPECT BETWEEN CULTURES”
24 January 2013 - THE MELCHIOR LERIDON LIBRARY COUNTS AN IMPRESSIVE NUMBER OF VISITS TWO MONTHS AFTER OPENING
14 November 2012 - THE MELCHIOR LERIDON LIBRARY OPENS ITS DOORS IN COTONOU
13 November 2012 - “THE BEAUTIFUL LIBRARIES OF BENIN”: INAUGURATION OF THE FIRST OPEN-ACCESS LIBRARY FOR YOUNG PEOPLE DECORATED BY A RENOWNED BENINESE ARTIST
20 October 2011 - AAD IN BENIN TO MEET ARTISTS
contact us>
Share : Twitter Facebook