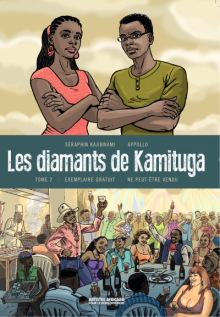 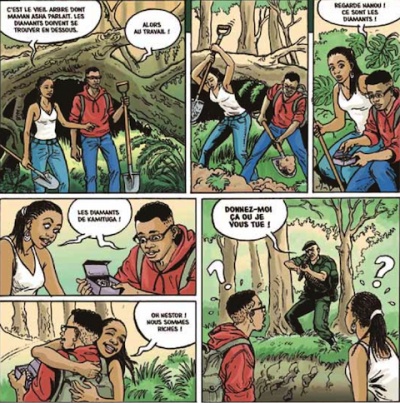 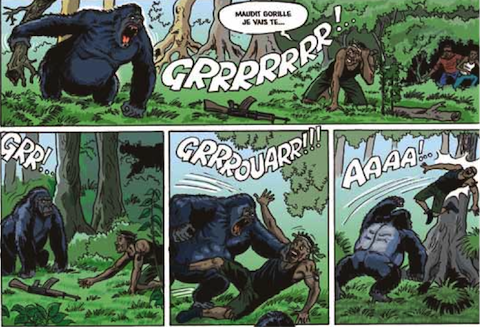 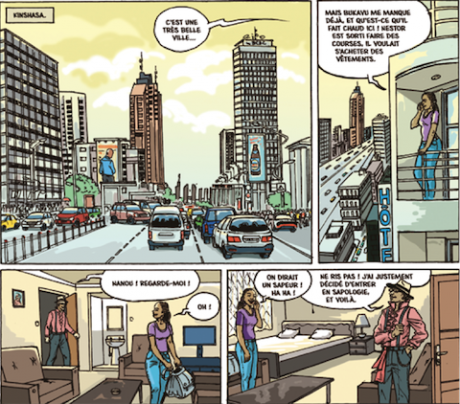 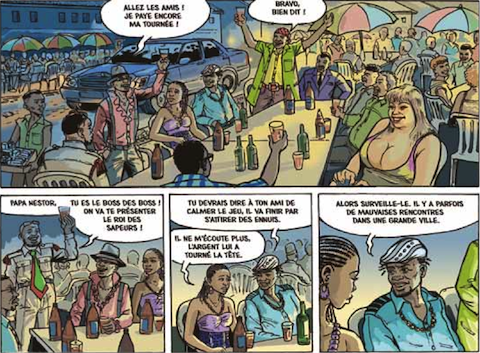 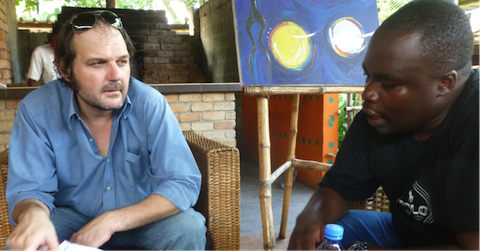 The scriptwriter Appollo and the cartoonist Séraphin Kajibwami © AAD

The program “Operation Prevention” is the continuation of “Les Bulles de Bukavu”, with the release of the second volume of “Les Diamants de Kamituga”. In the context of “Operation Prevention”, AAD has funded the publication of a sequel to “Les Diamants de Kamituga”, produced by Séraphin Kajibwami in collaboration with the scriptwriter Olivier Appollodorus. This second volume narrates the adventures of a young woman during a trip from Bukavu to Kinshasa, and 150 000 copies were printed, thereby breaking the record set by the first comic book to become the most printed comic book in Sub-Saharan Africa! SOS-Sida distributed this work for free in the whole South Kivu province through the provincial ministries of education and of health, and linked up with other Congolese associations in order to expand the dissemination to the entire DRC. In parallel with this awareness campaign and in support of the activities of SOS-Sida, AAD has committed to cover the running costs of the voluntary testing centre of Kamanyola, allowing free and anonymous testing in this medium-sized city, located 50 km from Bukavu, at the border between the DRC, Burundi and Rwanda.

While significant progress has been made in the fight against AIDS thanks to recent international efforts and medical breakthroughs, the situation in Sub-Saharan Africa remains dire and the percentage of the population getting tested for HIV/AIDS is negligible. In the Democratic Republic of Congo (DRC), several decades of conflict and a sustained fragile security situation have taken their toll, and HIV awareness and prevention work remain a crucial element in the reconstruction of this country.

Holding this firm conviction, African Artists for Development has been a partner of the Congolese association SOS-Sida for almost seven years, in order to contribute to their efforts stemming the spread of AIDS in the province of South-Kivu. This partnership led to the 2009 project “Les Bulls de Bukavu”, for which AAD mobilized the comic book artist Séraphin Kajibwami to create a comic book integrating AIDS awareness messages into an action-packed story. 100,000 copies of this comic, entitled “Les Diamants de Kamituga” have been distributed in South Kivu and have already doubled the number of individuals requesting voluntary HIV screening tests.

Building on this initial success, AAD has decided to renew their project and partnership with SOS-Sida, this time extending the scope of the operation to the national level, aiming to touch at-risk populations throughout the DRC in the spirit of the sixth UN Millennium Development Goal (MDG): “Combat HIV/AIDS”.

The objectives of this program are to contribute towards the eradication of the epidemic in the entire DRC, by raising the reader’s awareness of the risks of AIDS and by sharing prevention messages.

As a matter of fact, SOS-Sida pursues a holistic approach to combatting AIDS, and provides patients with psychological support, in addition to testing and prevention messages. These different approaches are crucial for an efficient treatment.

150 000 copies of the second volume of “Les Diamants de Kamituga” were distributed throughout the entire Democratic Republic of the Congo.

As a result of the three programs undertaken with SOS-Sida (“Les Bulles de Bukavu”, “Rap Against Kids”, “Operation Prevention”), the amount of people tested by SOS-Sida increased by 50% since 2009.

‘Operation: Prevention’ is part of AAD’s Clinton Global Initiative (CGI) Commitment ‘Art Against AIDS: Enabling Local Solutions in the DRC’, publicly announced on September 23rd 2012 during the CGI Annual Meeting in New York. Through this Commitment, dedicated to the Democratic Republic of Congo, AAD seeks to extend the scope of its AIDS awareness and prevention campaign to the national level, through partnering with other CGI members working in the DRC and sharing its innovative materials.