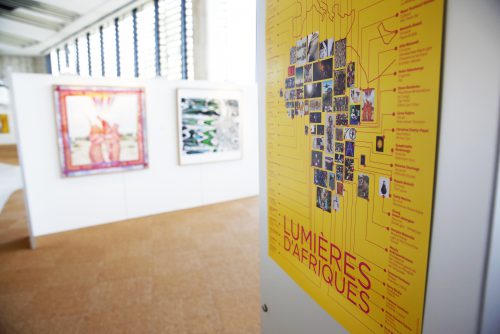 Designed by the African Artists for Development Endowment Fund, the exhibition “Lumières d’Afriques” was presented from 13 to 31 March 2017 at the Mezzanine E of the Palais des Nations (UN) in Geneva, Switzerland.

This fourth presentation of “Enlightenment of Africa” ​​as well as the exceptional partnerships between the International Organization of la Francophonie, the African Union and African Artists for Development once again underline the commitment of AAD-fund for the development of the continent .
This exhibition has been inaugurated under the patronage of the Director-General of the United Nations Office in Geneva, Michael Møller, with the presence of Antoine Barbry, permanent representative of the International Organization of the Francophonie at the United Nations in Geneva and of Jean-Marie Ehouzou, Permanent Representative of the African Union to the United Nations in Geneva.


The presentation of Lumières d’Afriques at the heart of the United Nations is a powerful symbol of the crucial role that the continent and African civil societies play in promoting the objectives of Sustainable Development.