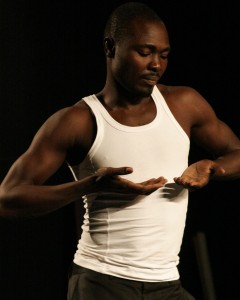 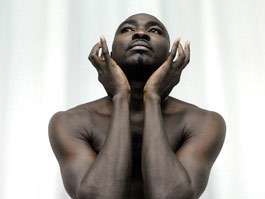 Trained in traditional dance from the age of 13 by a choreographer from the Chad National Ballet, Taïgué Ahmed joined the Youth Trestle Company started by the Chadian choreographer Hyacinthe Abdoulaye Tobio in 2002. He later performed in the piece “The Shadow of a God Departed” and participated in the fifth annual Choreographic Encounters of Africa and the Indian Ocean, held in Madagascar.

Ahmed then discovered contemporary dance through workshops led by Julie Dossavi, a French choreographer of Beninese origin, in N’Djamena in 2003. He studied at Germaine Acogny’s School of Sables in Senegal and then the National Center of Dance of Pantin in France before returning to N’Djamena to become a trainer of young dancers himself.

After touring France with Dossavi’s play “To Be in the Skin of a Woman” in December 2009, Ahmed presented his solo “Spit My Story”, where he recounts how dance can help victims of war build back their character and confidence. Forcibly recruited at the age of 22 by the Chadian army, Ahmed has himself a sensitive history with war and has made these experiences the heart of his work as a dancer.

He presented his solo at the eighth annual Dance, Africa, Dance festival, held in Bamako, Mali in October 2010, and then in Mauritania and Briancon, France in December 2011.

In June 2011, Ahmed was invited to Amsterdam to present the creation “The Garden of Delights”, interpreted from the work of the Dutch painter Jérome Bosch.

As a socially engaged artist, he wanted to share his past experiences with the Central African and Sudanese refugees residing in the Amboko and Gondié camps of Chad, as well as the Dosseve camp in the south. With the help of UNHCR in 2006, Taïgue held workshops in the camps close to Goré, to which more than 300 refugees registered.

He also hosts several workshops with young people. He visited Equitorial Guinea in 2010 where he spent a week at the School for Children with AIDS.