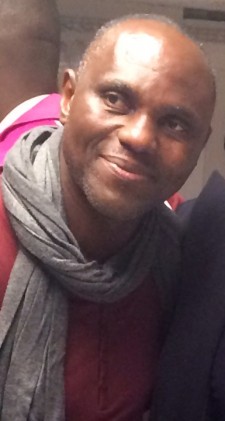 Born in 1969 in Léguéma, Burkina Faso, Salina Sanou is a dancer and a contemporary dance choreographer. He studied drama in Ouagadougou before turning to African dance. He joined Mathilde Monnier’s dance company in 1993 at the National Choreographic Centre of Montpellier. He met Saydou Boro with whom he founded in 1995 the company Salia nï Seydou. Together, they run the Body Dialogues biennale in Ouagadougou and the Choreographic Development Center “La Termitière”, first of its kind in Africa.

Salia Sanou was also for many years the artistic director of the Choreographic Encounters of Africa and the Indian Ocean, organized by the Centrre National de la Danse in Pantin, where he was in residence from 2008 to 2011.

In 2011 he created the company Perpetual Movements and created the show “ Beyond Borders” in 2012. More recently he created “Doubaley (The Mirror)” with Japanese musician Takumi Fukushima and “Clameurs des Arènes” created in July 2014 for the Montpellier festival.