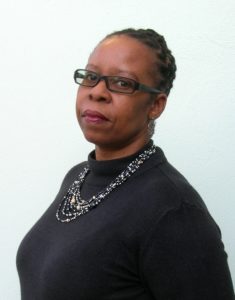 Born in 1967, in Johannesburg, South Africa Neo Matome lives and works in Gaborone, Botswana. After receiving her BA in Graphic Design at Coventry University in the United Kingdom, she pursued and completed an MFA in Computer Graphics Design at the Rochester Institute of Technology in the United States, with the support of a Kellogg Foundation scholarship.

Her creative process, involves painting, digital photography and installation work. Neo Matome is an committed artist, who confronts the recurring themes of gender, identity and power in Southern African societies.

Neo Matome is employed as a Graphic Designer at the University of Botswana. She has contributed to the promotion of visual arts as a curator and a member of the committee that founded the Thapong Visual Arts Centre – a space where artists can come together, attend workshops and exhibitions. Currently, she serves as Deputy Chairperson of the Creative Industries Sector Committee under the Human Resource Development Council.

In 2010, she had her first solo exhibit in the Museu Nacional de Arte in Maputo, Mozambique and, in 2011, at the Botswana National Museum in Gaborone.