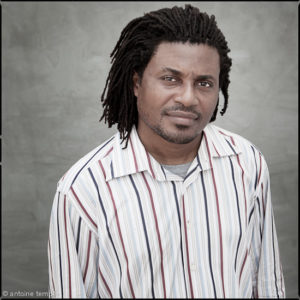 Born in the Central African Republic, in 1973, Hervé Youmbi lives and works in Douala. A passion for drawing and painting led him to attend the Institut de Formation Artistique (Institute of Artistic Training, IFA) of Mbalmayo, Cameroon, from 1993 -1996. Here he discovered his affinity with installation art. It is during a brief time at the École des Arts Décoratifs of Strasbourg from 2010-2011, that he produced his first videos. As a result, his artistic process began to focus, to a greater extent, on both multimedia installation and work involving urban public spaces.

Hervé Youmbi draws his inspiration from history, especially that of his country and the African continent, denouncing both Cameroon’s colonial past or recent dictatorial regimes. His interest in introspection and the search for identity has led him to portraiture, which is at the heart of all his work.

As a teacher at the Nkongsamba and Foumban art schools, Hervé Youmbi contributes to the development of the Cameroonian art scene. He is a founding member of the Cercle Kapsiki, a collective group of five visual artists and scenographers from Douala, founded in 1998, which also provides a cultural exchange space, the K Factory. This space serves as a resource center for young artists.

He has taken part in numerous exhibitions and is frequently an artist in residence. In 2009, he received the “Visas pour la création” grant and, in 2012, the prestigious Smithsonian Artist Research Fellowship.