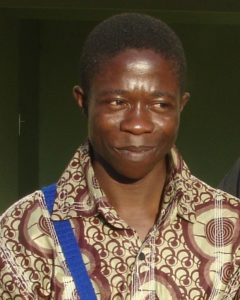 Born in 1977, in Begoua, in the Central African Republic, Dieudonné Sana Wambeti currently lives and works in Bangui.

It is at the age of 14, having completed primary school, that Dieudonné Sana Wambeti started his easel painting training at the studio of the artist Michel Ouabanga. He began his career with photographic portrait commissions. In the 2000s, he started focusing on a more personal approach with a particular emphasis on ecological issues and a wish to alert his fellow citizens to these issues.

His paintings contain naïve and surrealist overtones. They are the result of a reflection on the Central African Republic’s future and are inspired by daily life and the luxuriant vegetation of his country.

Dieudonné S. Wambeti’s work is in numerous collections, including at the Fondation Zinsou in Cotonou, Benin. His work has also been shown in several festivals in France. Other exhibitions that have included his work are the Jeux de la Francophonie, in Beruit in 2009, and in Shanghai, during Expo 2010.