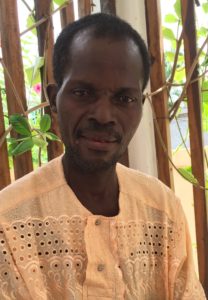 Born in 1964, in Benin, Serge Mikpon, alias Aston, was a musician before becoming a visual artist. His nickname was given to him by his friends, who named him in reference to his skills on the guitar.

As a self-taught artist, he first became interested in painting, before devoting himself to sculpture and installation work. Concerned with environmental issues, his approach consists in giving a second life to household and industrial waste. He recycles waste materials turning them into works of art with a strong power of denunciation.

In his desire to preserve the collective memory, he is predominantly interested in themes such as the Slave Trade in the 18th century, the use of gas chambers and the killing that took place during World War II. He denounces our collective lack of responsibility.

His work is shown in several countries, including Benin, France and Brazil. His art pieces are also a part of prestigious collections such as the Foundation Zinsou in Cotonou and the New World Museum in La Rochelle.