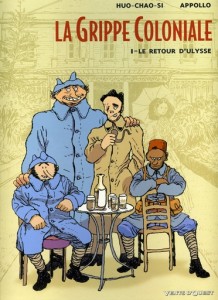 Based in Kinshasa, the Democratic Republic of Congo, Olivier Appollodorus, better known in the comic world as Appollo, is an AAD partner for the project “Operation: Prevention”, launched in September 2012.

Born in Tunis, Tunisia, Appollo grew up on the island of Réunion where, after graduating high school, he became an active comic book artist. He founded the Band’Décidée association with several other students and created a magazine, Le Cri du Margouillat, and the Editions Centre du Monde publishing house, both of which have played a key role in the development of the comic book industry in Réunion. Later, he collaborated with Capsule Cosmique, a magazine aimed at young readers which offered a dynamic alternative to Spirou or Okapi, two popular children’s magazines in the Francophonie.

His stories are characterized by his subtle yet nuanced writing, placing the story in a historical setting while creating complex characters that embark on crazy adventures. Appollo has worked with the illustrator Lewis Trondheim, with whom he produced “L’île Bourbon 1730” (2007), Li-An (“Fantômes Blancs”, 2005 – 2006) and Huo-Chao-Si (“La Grippe coloniale”). His most recent comic book “La Vie Sans Barjot”, created with the illustrator Stéphane Oiry, was nominated for Best Comic at the 2012 Angoulême International Comics Festival.