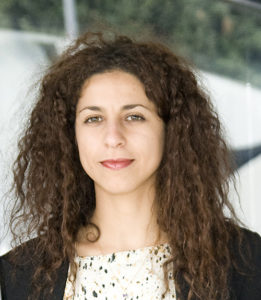 Amina Zoubir is a visual artist, director and video art curator. She lives and works between Paris and Algiers.

After completing an art degree (DESA) in Graphic Design, in 2006, at the Ecole Supérieure des Beaux-Arts of Algiers, in 2009 she graduated with a Masters in Theory and Practice of Contemporary Art and New Media, from Paris 8 University.

Her videos and photographs question the notion of (female) body language and its reflection in the urban space of the world, specifically North African and Arabic. In 2012, she carried out six performances in the urban space of Algiers, entitled “Take Your Place,” for the web documentary “A summer in Algiers.”

Her work has been shown at several international events, Torrance Museum in California; the Pink Gallery, Seoul; the Artos Foundation, Cyprus; the TAC, Eindhoven; the Palazzo Leonardo d’ Arte Contemporanea, Turin; the Tangier Cinématéque; the 13th Biennial of the young Mediterranean and European creators, in Bari, and the 30th Biennial of contemporary art in Pontevedra. She also curated many video art exhibitions, in Algeria and France.