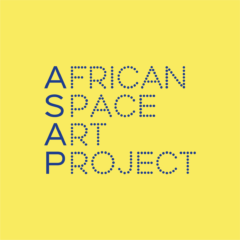 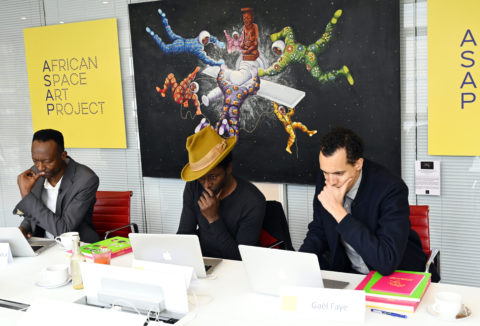 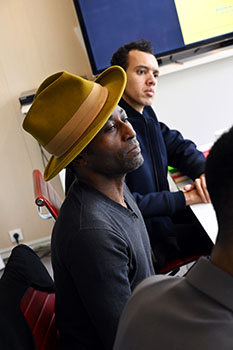 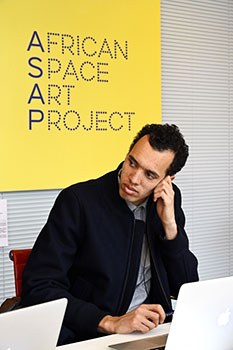 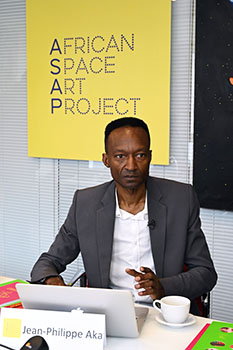 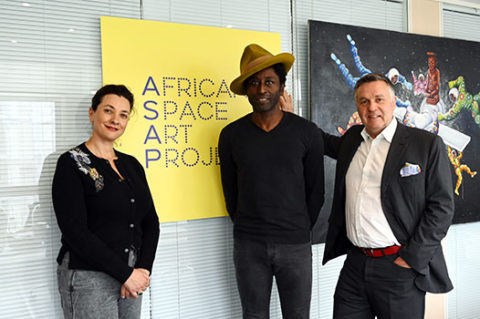 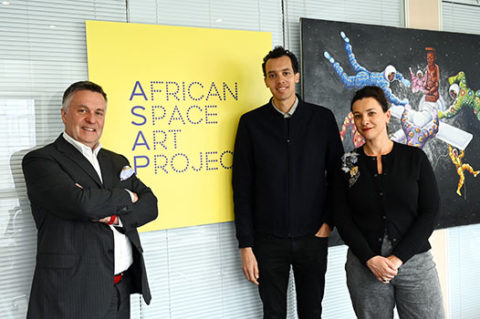 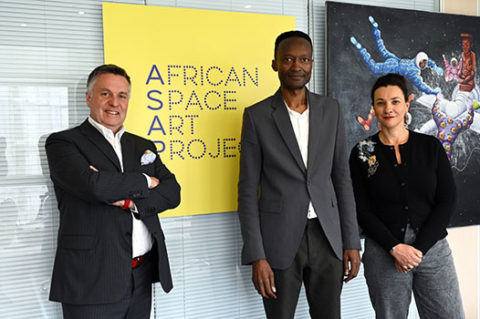 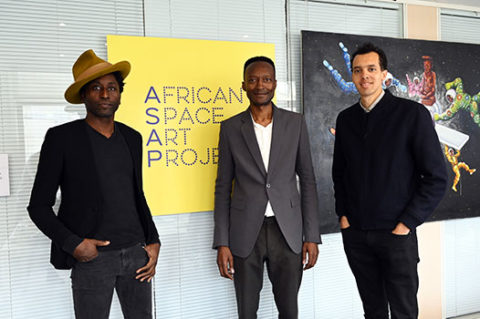 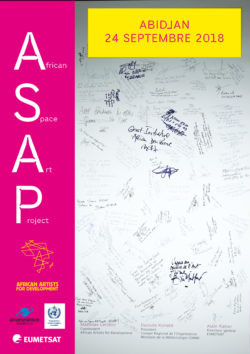 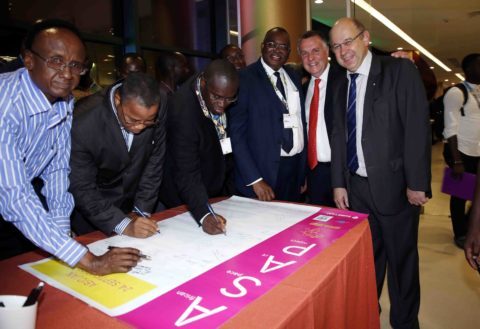 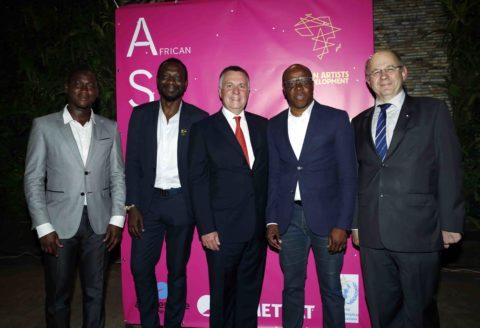 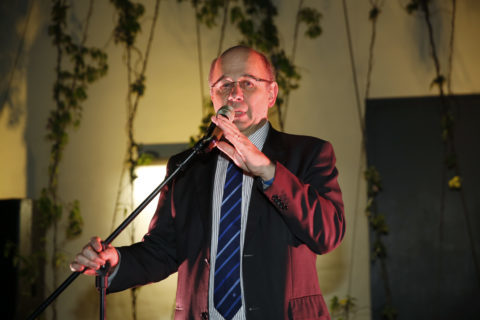 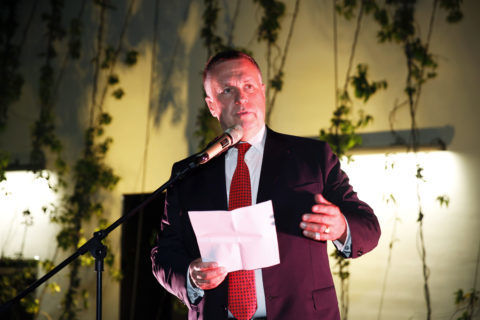 In partnership with the Arianespace, EUMETSAT and the World Meteorological Organization, African Artists for Development will send in 2021 the first African artwork in space, a powerful symbol of the continent’s artistic power.

This piece of art will embody the image of a modern, ambitious, optimistic Africa that takes us beyond the stars.

It will exist in double shapes:

1) A spatial form, it will be applied on the Ariane 5 nose-cone.

2) A terrestrial form, it will be presented through the continent on the launcher’s headdress model.

To celebrate the mobilization of the entire African artistic community surrounding ASAP, the artwork sent in the space will include in its frame all the names of the artists who have participated in ASAP funding by donating one of their works.

As it is an exceptional commission, the work will be realized by a world-renowned African artist. A selection committee composed by the project partners (AAD, Arianespace, EUMETSAT, World Meteorological Organization), leading members of the world of art, development and the space industry, will be set up in order to fairly choose the artist.

This major project is historic and was officially launched at the annual Forum of Abidjan organized by EUMETSAT on September 24, 2018.

The first 100% African act in space

Since 1999, the African continent has embarked upon the space conquest. If the first launch of a communications satellite was done by South Africa in 2018 with the support of NASA, it has now been joined by 7 other countries with a satellite device in orbit.

In 2017 the African space agenda has accelerated with four launches initiated by African countries.

Next step: the launch in 2021 of the first meteorological satellite reserved for the continent:  a fundamental issue to better control weather forecasts.

April 23th 2020 : Jury (composed of representatives of AAD, EUMETSAT and Arianespace) will select the winner

The NGO African Artists for Development designed and implemented the African Space Art Project (ASAP), an original programme in partnership with Arianespace, Eumetsat, and the World Meteorological Organization.

AAD’s African Space Art Project was born out of the observation that Africa is the continent that emits the least CO2 and yet it is the continent that will suffer the most from global warming. In 2021, an Ariane 5 launcher will launch a new EUMETSAT third-generation geostationary satellite into orbit over Africa to monitor climate and weather changes on the African continent.

ASAP wants to demonstrate the strategic importance of such a launch for the people of Africa. This satellite and the data it will provide for the continent is an unparalleled challenge.

An artistic committee made up of 4 personalities from the world of culture and the arts will choose 3 laureates among 100 pre-selected artists. The jury, composed of representatives of AAD, EUMETSAT and Arianespace, will select the winner among the 3 who will be entrusted with a 2-month residency in the EUMETSAT premises (Darmstadt, Germany) in order to create the work that will be transferred to the Ariane 5 headdress.

Born in Côte d’Ivoire in 1972, Jean Philippe Aka is the founder of www.africartmarket.today, an online valuation services for fine and decorative African arts. He also is the editor of the annual Africa Art Market Report.

In 2012, he was a part of UNESCO’s preselection committee for the UN Permanent Memorial to Honor the Victims of Slavery and Transatlantic Trade, won by Rodney Leon, the Haitian-American architect, whose proposal The Ark of Return was unveiled at the United Nations in 2015.

Born in Burundi in 1982, Gaël Faye is a French-Rwandan artist and writer. When the Burundi civil war and the genocide of Tutsis in neighboring Rwanda broke out in 1994, Faye fled to France the following year. He studied business and finance and worked in an investment fund in London for two years before deciding to make the leap in music. Influenced by Creole literature and by hip hop culture, he released an album in 2009 as part of the Milk Coffee & Sugar group. In 2013, he released his first solo album Pili Pili on a butter croissant. Recorded between Bujumbura and Paris, it feeds on diverse musical influences: rap tinged with soul and jazz, semba, Congolese rumba, sebene… In 2016, he published his first novel, Petit Pays, winning numerous prizes, including the Fnac, Audiolib and Goncourt high school students’ prizes.

Born in South Africa in 1979, Melissa Goba is an artist, writer and curator who has held various positions in the field of visual arts. She is particularly interested in popular culture and its global relationship with Africa. She writes regularly for newspapers and catalogs (including the FIFA catalog in 2010). She has curated numerous projects and was the initial consultant for the Murray & Roberts collection: Standard Bank Young Artist, SASOL Wax Award and the Venice Biennale. She held a Chair at the Arts & Culture Trust (ACT) in South Africa until 2017.

Born in Nigeria in 1968, Keziah Jones, of his real name Olufemi Sanyaolu, is a singer-songwriter and guitarist. He moved as a teenager to the United Kingdom but is now based in the United States and travels regularly to France and Nigeria.

He invented a new musical style, the Blufunk, first introduced via Blufunk Is A Fact! The style is a mix of those who have influenced him such as Fela, Prince, Jimmi Hendrix and Miles Davis. This mix of funk and acoustic blues was carried by the global success of his single Rhythm is love.

Jones released a series of albums: African Space Craft and Liquid Sunshine followed by the breakthrough of his Black Orpheus album. He most recently released the Nigerian Wood album, which he inaugurated with a series of surprise concerts in the Paris metro stations.

The prestigious jury of the African Space Art Project is composed of members of the world’s artistic and scientific community. It will meet on Thursday 23rd, April 2020 to select a winner among the three contemporary African artists chosen by the Artistic Committee.

Members of the jury: