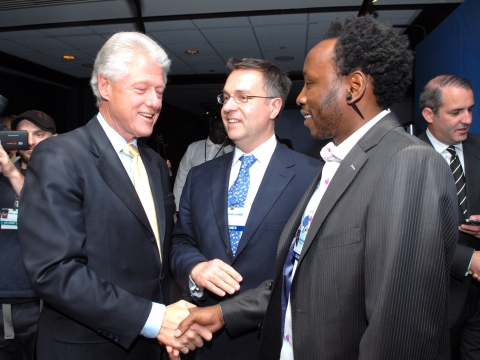 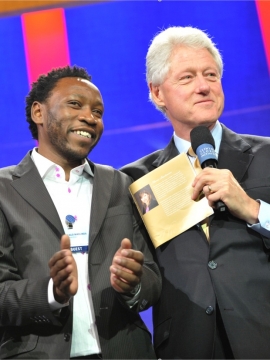 Gonçalo Mabunda and Bill Clinton during the awards ceremony © CGI 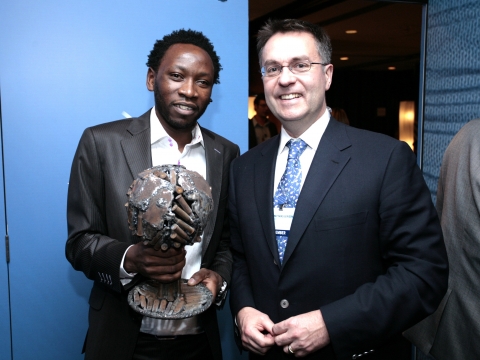 On the occasion of a special session called “From conflict to creativity, reducing violence through the arts,” African Artists for Development, has been recognized for its project « Les Bulles de Bukavu » in the Democratic Republic of the Congo. Irina Bokova, General Director of UNESCO, has congratulated Matthias Leridon for the reverence of AAD’s commitments and underligned the importance of such a project for Bukavu’s community development.

AAD attended the annual Clinton Global Initiative summit in New York, where it presented its “Commitments to Action” alongside hundreds of CEOs, heads of State and government and NGO presidents from around the world. Each year, the event gives leaders in the economic, political and development world a unique opportunity to meet, take decisions together and make sustainable, quantitative commitments on key issues affecting our world.

Founded in 2005 by former U.S. President Bill Clinton, the Clinton Global Initiative is a unique philanthropic organization. The CGI’s intention is to fight against the negative effects of globalization and underdevelopment, not by funding or by making direct field activities, but rather by bringing under its umbrella of companies, institutions or individuals carrying innovative projects that engage in itself, to establish “Commitments to Action” that are specific and measurable. Rather than build a new structure for discussion, Bill Clinton wanted, through the creation of the CGI, to propose a new form of global summit that would focus on concrete results enabled by the combination of unconventional minds and personalities.

Already under the impetus of Matthias and Gervanne Leridon, Gonçalo Mabunda is an African artist who created the 2008 CGI Awards, which were awarded to individuals that year for their social engagement. Representing planet earth, the trophies were made from bullet casings and weapons recovered by the artist at the end of the civil war in Mozambique, symbolizing the seizure and the overthrow of the violence for peace and development.